Change is one of life’s inevitabilities.

It affects us all at some stage, and almost every organisation at some level. We know the theory: if we don’t change, we stand still. That makes change a strategic imperative that most directors will readily acknowledge.

But that doesn’t make it easy.

The impact of change

Change is most often driven at two levels: from the board, who are looking for transformation, whether it’s exploring a new market, adapting to new technology or responding to economic pressures; or by management, who are seeking to improve productivity, refine customer service or change team dynamics.

Regardless of the size or scale of change – or whether its genesis is strategic or tactical – the reality and challenges of change are the same. It is people who have to change, to adopt new business processes and objectives, to create new relationships within and outside the organisation, and, in many cases, to make themselves anew.

It is the experience of people, who respond with both reason and emotion that will dictate the success of the programme. The extent and difficulty of these personal changes should not be underestimated by any Board or senior executive driving change.

Of the many possible approaches to connect with people as they go through change, there are three that we would highlight.

Keep things real: avoid the language of the MBA and keep honesty and respect as non-negotiable values.

Engage people: use a narrative that is worthy of people’s efforts to change and tell a compelling story which connects both logically and emotionally, and which uses clear language.

Create a dialogue: give people the chance to express what they're going through, and for the organisation to respond accordingly. Openness goes a long way: if a particular change is going to hurt, just say so.

For change to be successful, we need a decent working understanding of the people who are being asked to change. How are they feeling about what's happening? What do they think of the future and where they're being asked to fit in? What are their hopes and fears?

One way we've started to get a better picture of these emotions is with a tool called the Four Rooms of Change®.

The Four Rooms was developed by Swedish organisational psychologist Claes Janssen in the early 1970's to help people reflect on their responses to change. Organisational development expert Marvin Weisbord describes it as "an enormously effective way of freeing people to experience whatever is going on".

The four rooms - or psychological states of mind - are Contentment; Self-Censorship & Denial; Confusion & Conflict; and Inspiration & Renewal. What people feel and how they speak differ in each room.

Such self-censorship won't last through real change. Soon we might find ourselves in the Room of Conflict & Confusion, grappling the emotional demons such as sadness, anger, fear, self-doubt and illusive hope. Only by harnessing these emotions can we move to the Room of Renewal, in which our energy returns with enthusiasm and learning for the future.

Through the Four Rooms, people learn how they can influence change by taking responsibility for their feelings and actions. Those leading the change also get a much clearer picture of how people are responding, to better guide the direction and pace of change.

How these conversations take place has to suit the changes we're seeking. Photographs might be used to start the conversation or draw out feelings, perceptions and desires for the change process. Avoid the temptation to over-facilitate; it's all about what the people, not the facilitator, are saying. Other means - including informal conversations and pulse checks - may be used as well to find out what people are going through.

To reach the people caught up in change, you need to think beyond the rational.

This story was shared by

The Four Rooms of Change® 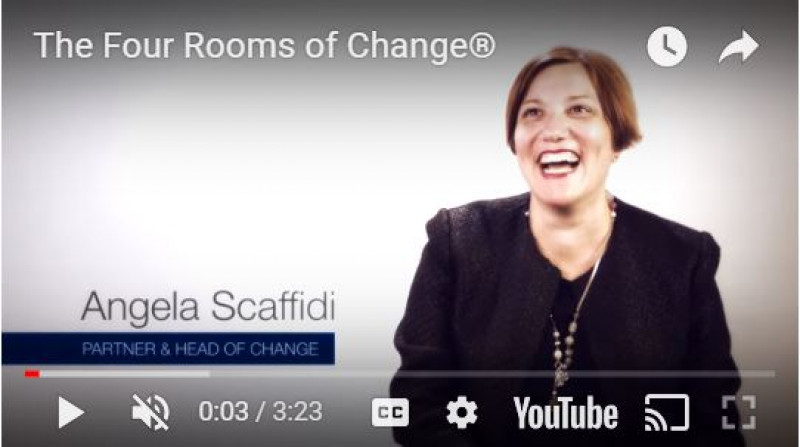