Each year, over 40,000 people are reported missing to Australian police. While most are found within a week, over 400 remain missing long-term.

Daniel O’Keeffe’s disappearance in 2011 prompted his sister, Loren, to leave her job and start the biggest campaign of its kind: Dan Come Home. Through regular media coverage and nationwide attention, the search for Dan highlighted several gaps in Australia for missing persons and those left behind.

As other families in a similar situation began to contact Loren for advice and support, Loren decided to establish Missing Persons Advocacy Network (MPAN) in 2013.

SenateSHJ is a proud partner of MPAN. MPAN's exists to create awareness of long-term missing persons, provide support to families and advocate for a better understanding and recognition of missing person's in Austraila. This is why MPAN began The Unmissables coffee cup campaign. The campaign is a modern-day twist on the well-known stark, grainy photos on milk cartons that often depicted individuals as cases rather than people. The campaign, spanning the length of National Missing Persons Week, is the result of families collaborating with artists and writers to create specific, heartfelt portraits of missing loved ones and giving the public an opportunity to engage.

In 2019, the stories of eight missing people were told. MPAN distributed 100,000 biodegradable coffee cups via cafes across Australia for National Missing Persons Week (4–10 August 2019). We ran a pop-up café in Sydney's Martin Place. The campaign was also a feature of Round 20 of the Australian Football League at the Melbourne Cricket Ground. 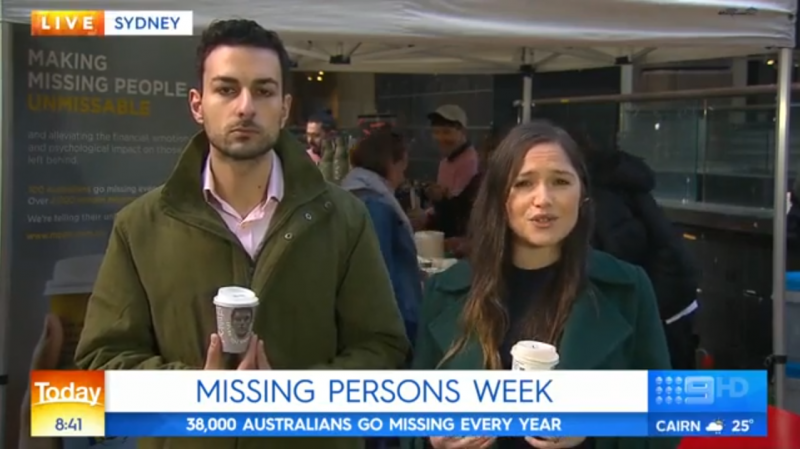 Here is a snapshot of what we heard: The judges described the campaign as ‘a simple, effective and impactful campaign that leveraged Australian everyday behaviour to share real emotive stories’.

We are proud to support and work with Loren and MPAN in raising awareness of Missing Persons in Australia.

"What a dream team [SenateSHJ] are. I cannot thank each and every one of you enough – this was the most impactful National Missing Persons Week in the initiative's history and it simply wouldn't have been without the commitment and dedication of Aaron Prestipino and Bella Barker and thanks to their generous leaders. A tremendous job."

— Loren O'Keeffe, Founder and CEO of MPAN in relation to the 2019 The Unmissables coffee cup communication campaign.